Amazon’s “Look Inside” feature has long provided readers a way to preview the first few pages of eBooks.

For authors, though, it’s often been a source of frustration, as Look Inside has never looked much like the eBooks seen by readers. Features like drop caps and ornaments — and all of the other touches that make up a Vellum-formatted book — couldn’t be seen in the Look Inside, as it was a place where Amazon continued to use their older “mobi7” format.

That’s why we’re very excited to have discovered that many books created with Vellum have a whole new Look Inside: one that provides a much better preview of an eBook by adopting the same KF8 format used by Amazon apps and devices. 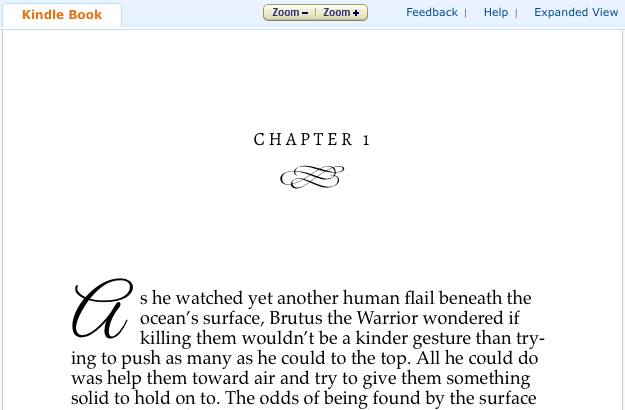 Here are just a few of the many books where you can see Amazon’s new Look Inside:

While we’ve found many eBooks that include this new Look Inside, some — especially those recently published — still use the older format. So you may not see the new Look Inside right after you upload your book to KDP, or even for a few weeks.

Other than waiting, though, you shouldn’t have to do anything to receive it. You may even find your existing titles have already been updated.

Since there are still a few differences, we’ve already begun looking into how we can adjust Vellum’s output to accommodate Amazon’s new Look Inside. But we’re thrilled to see such a huge improvement in how readers preview your books.

Update 8/2: We’ve since found that Amazon’s mobile site continues to use the older mobi7 format for its Look Inside. We hope that Amazon will eventually upgrade this to match the behavior of its full site. In the meantime, readers using mobile devices like iPhones may still see the old Look Inside.